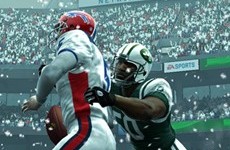 A federal judge ordered a fraud claim dropped from the copyright lawsuit against Electronic Arts Inc. over its popular Madden Football video game.  Tuesday’s order by U.S. District Judge Charles Breyer limits the upcoming trial of claims by former EA programmer Robin Antonick, that the company breached its contract with him by allegedly using his early computer code in later games without paying him royalties.

The loss of the fraud claim eliminates the potential of punitive damages against EA if a verdict were to go against the company.

Even with the remaining breach of contract assertions, Breyer said Antonick is entitled to “only thin” copyright protection.  Antonick must prove to jurors that later versions of Madden Football were virtually identical when viewed as a whole.

Now Antonick has only a breach of contract claim remaining on his assertion that the company violated terms of his 1986 contract to pay royalties on derivative works.

During a hearing last week, Breyer appeared on the verge of approving Antonick’s fraud allegation, but lawyers for EA convinced the judge to take a second look.

Last month, the jurors in the first phase of the case found that Antonick didn’t discover EA allegedly used his work until after 2005.  The opened the door to Antonick to proceed to phase two of the trial, the breach of contract claim.