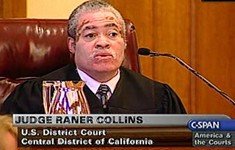 He heads one of the busiest federal courts in the country because the number of illegal immigration and drug smuggling cases filed in Arizona, due to its location along the border with Mexico.

The court is currently authorized to have 13 judgeships but six are vacant.  Last week the President nominated four people to fill the six openings.

Chief Judge Collins is one of two African-Americans on the Arizona court.  The other is Judge Glenda Edmonds.

Collins was born in Malvern, Arkansas and received his law degree from the University of Arizona College of Law and his undergraduate degree from ArkansasPolytechnicCollege.