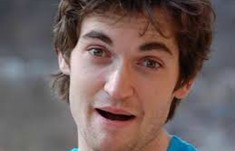 The man alleged to be “Dread Pirate Roberts” volunteered to go back to New York Wednesday to face charges he operated an online black market in drugs, counterfeit documents and other services.

The tall, slender Ross William Ulbricht stood shackled but said nothing during a hearing that lasted less than a minute before U.S. Magistrate Judge Joseph Spero.

Ulbricht’s lawyer,  Brendan LeBlanc said he would stipulate that Ulbricht be detained without bail but without prejudice to raising the issue again in New York federal court.  And the defense would waive an identity hearing, instead acknowledging that he was Ross Ulbricht, but added, “We disavow the alias’s used in the information,” – Dread Pirate Roberts.

Spero then ordered Ulbricht to be transported in custody to New York immediately.

Ulbricht was accused of operating the Silk Road website to provide illegal drugs using various technologies to hide the identities of the buyer and seller. And payment was allegedly made and received in the form of Bitcoins, a form of digital currency that does not rely on any centralized bank or agency to process payments, but instead relies on users’ computers.

He is charged in New York with conspiracy, hacking and money laundering.

Outside the courtroom LeBlanc said, “All we did today was admit his actual name was Ross William Ulbricht.  That was the issue before the court.”

Ulbricht, a 29-year-old engineer from Texas, was arrested last week when federal agents descended on the Glen Park branch of the San Francisco Public Library where Ulbricht had set up his laptop.

The government alleges that customers of Silk Road could buy meth, LSD, marijuana, heroin and MDMA through the website and even seek forged documents, such as passports.

Then the state of Maryland added a claim of murder-for-hire, alleging Ulbricht tried to hire a hitman to get rid of a suspected snitch.