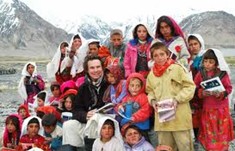 October 11, 2013 pammaclean Civil, US Court of Appeals Leave a comment

A federal appeals court upheld dismissal of the fraud and racketeering lawsuit against author Greg Mortenson over his book “Three Cups of Tea,” and his nonprofit Central Asia Institute.

The 9th U.S. Circuit Court of Appeal’s ruling Thursday, upholds an earlier decision of a trial judge in Montana.  Mortenson, who began schools in the mountains of Afghanistan and Pakistan, was accused of misrepresenting the story of the founding of the schools and readers of his books claimed they were defrauded.

Mortenson told the story of getting lost on a mountain climbing expedition and being rescued by local villagers.  He pledged to come back and start a school for their children.  This lead to the creation of numerous schools in the remote areas and Mortenson’s popular memoirs, “Three Cups of Tea” and “Stones Into Schools.”

But an investigative account by writer Jon Krakuer in 2011 contradicted some of Mortenson’s account and found some of the rural schools lacked supplies and were incomplete or unattended.

It alleged that Mortenson used money from his Central Asia Institute to support his travels and book promotion, rather than the schools.

The appeals court said the lawsuit was defective because it failed to specify with sufficient detail the roles of Mortenson in the alleged racketeering scheme.

Because of the defects, the district court was correct to dismiss the plaintiffs’ “claims for unjust enrichment, injunctive relief, an accounting, class status, punitive damages and damages against Penguin [books] on a theory of principal liability,” the court said.

The order was a nonprecedential ruling signed by Judges Barry Silverman, William Fletcher and Connie Callahan.