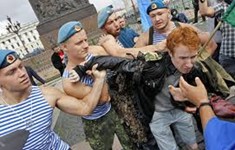 November 27, 2013 pammaclean Civil, US Court of Appeals Leave a comment

A federal appeals court revived the asylum petition of a Russian homosexual Wednesday because he sufficiently demonstrated the Russian government is unable or unwilling to control private citizens who persecute homosexuals in Russia.

The 9th U.S. Circuit Court of Appeals overturned the Board of Immigration Appeals decision that a Russian, identified only as John Doe, failed to meet his burden of showing the Russian government allows attacks on homosexuals.

The ruling is significant in the face of recent controversy over Russia’s treatment of homosexuals in advance of the 2014 Winter Olympics that will be held in Sochi.

Russia has said it will respect international norms against discrimination, but Moscow has passed anti-gay laws that censor information about the lesbian, gay, bisexual and transgender community, according to recent Washington Post accounts.

Judge Arthur Alarcon said that to show a well-founded fear of persecution if he is returned to Russia, Doe “was not required to demonstrate that the Russian government sponsored or condoned the persecution of homosexuals or was unwilling for that reason to control persecution of Doe.”  He met his burden of showing potential persecution.

Instead, the court ordered the BIA to reconsider the case to determine whether the U.S. immigration officials can show, by a preponderance of the evidence, either changed circumstances in Russia overcome Doe’s fear of future persecution, or that Doe can reasonably relocate to an area of safety in Russia.

Doe was born in the Ulan-Ude, the capital of the Republic of Buryatia, a region of south-central Sibera, along the border with India.

He testified that he was subject to two violent attacks in 2002, when he was 18 years old.  He attended an East Siberian university in Ulan-Ude for two years and joined a club for homosexuals.  When classmates found out he was mocked and attacked, according to the court.

Following the 2002 attacks while he was walking in a park with his partner, Doe was kicked and beaten and his eye was injured.

He tried to file a police report but officials said his injuries were “just bruises” and did not want to take the report.

In a second attack a year later he was beaten unconscious and suffered internal brain hemorrhaging and was hospitalized for three weeks.

His father filed a police report and provided names of the attackers but the police took no action because the attackers remained free, according to the opinion.

He tried moving to Moscow but faced ethnic discrimination there.  He came to the U.S. in 2003 on a student visa to attend the AmericanLanguageCommunicationsCenter in New York.  He remained and sought asylum in 2005.

The 9th Circuit held earlier this year that homosexuals are a “particular social group” and therefore homosexuality is a protected ground for claims of asylum.