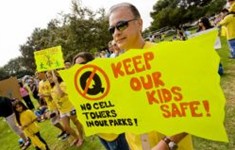 December 11, 2013 pammaclean Civil, US Court of Appeals Leave a comment

Telecommunications companies can be required to submit for voter approval plans to hoist cellphone antennae on city-owned property, in an appellate victory for the city of Huntington Beach.

The 9th U.S. Circuit Court of Appeals rejected T-Mobile’s claim that requiring voter approval, based on a special Huntington Beach law, was preempted by the Telecommunications Act of 1996.

Congress passed the 1996 law to encourage the development of wireless telecommunications, but it also provided for local control of zoning issues.

The act closely tracks typical division of land use decision making, according to Judge Sandra Ikuta.  But the federal law did impose procedural limits on land use regulation by local authorities.

“Congress began by enunciating a general principle of preservation of local authority,” she said, except on decisions regarding placement and construction of wireless service facilities.

While T-Mobile got all the permissions it needed under the city zoing law, it failed to comply with a special Huntington Beach requirement of voter approval – which was outside the zoning regulation addressed in the federal law.

A 1990 voter initiative, known as Measure C, amended the Huntington Beach charter to limit the city’s ability to use city-owned property.  It required any structure costing more than $100,000 to be built in any park or beach must be submitted to voters and gain a majority vote of the city council.

In 2007, T-Mobile applied for wireless permits to build an antennae in HarbourViewPark and BolsaViewPark.  The city approved the permits for construction costing $80,000 and $60,000 each.  But after construction began in 2009, aggressive protests blocked the activities and T-Mobile agreed to stop pending city efforts to resolve the unexpected public opposition.

The city then said because the total construction costs would exceed $100,000, the city was obligated to get voter approval.

T-Mobile sued and a federal trial judge sided with the company saying that federal law preempted the vote.  The 9th Circuit decision overturns that ruling, saying the city’s voter mandate is outside the normal zoning process and not subject to federal restrictions.

“Once it became clear that T-Mobile’s proposed project triggered Measure C, T-Mobile lacked the necessary land owner permission,” Ikuta wrote.  “In other words, Measure C had an effect on landowner approval, not on the city’s adjudicative process,” she said.