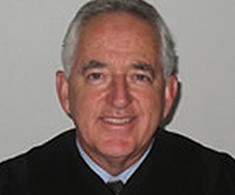 Arizona Superior Court Judge Alan Soto has been nominated to serve as a federal judge in Arizona by President Barack Obama.

Soto, 53, currently serves as presiding judge in the Santa Cruz County Superior Court.  He has been a judge on the court since 2001.  He is also a member of the Arizona Judicial Council, the policy-setting body for the state court system.

Soto has served on the court’s technology commission and the advisory committee on rules, as well as serving as a visiting panelist on the Arizona Supreme Court and the state Court of Appeal in Tucson.

If confirmed by the U.S. Senate, he would fill the vacancy created when Judge David Bury assumed senior status.

Soto was in private practice prior to joining the bench, as name partner in Soto, Coogan and Martin in Nogales from 1992 to 2001.  He was a sole practitioner from 1975-79 and served as the part-time town attorney for Patagonia, Arizona from 1975-1992.

He received his law degree from ArizonaStateUniversity in 1975 and his undergraduate degree from ASU.  He is a native of Nogales.