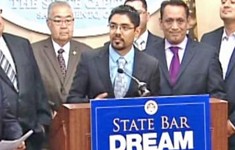 Undocumented aliens may get a law license in California, the state Supreme Court ruled Tuesday in unanimously awarding a bar card to Sergio Garcia.

Garcia, 36, graduated from law school and passed the state bar on his first try in 2009. But he could not become a lawyer because he was an unlawful alien, brought her illegally by his parents when he was a toddler.

But the State Bar declined to issue a bar license.  Shortly after the court held oral arguments in September, the California Legislature enacted a law that took effect January 1, 2014, that removes any legal barrier to Garcia’s admission to the bar.

There is no federal law that would prevent a state granting a law license to an undocumented immigrant, said Chief Justice Tani Cantil-Sakauye.  The state’s policy is clearly that undocumented immigrants who have met all the qualifications for admission is within the state’s public policy.  “We find no basis to disagree with that conclusion,” she wrote.

Garcia was born in Villa Jimenez, Mexico in 1977 and came to the U.S. when he was 17 months old and lived in California until he was nine in 1986, when his parents moved back to Mexico.  He returned to California with his parents in 1994 and again entered the U.S. illegally, although his father had obtained lawful permanent resident status.  He became a U.S. citizen in 1999.

Garcia sought lawful immigrant status in 1995, but due to the backlog of requests for immigrant visas he has waited 19 years and may have another six-year wait, according to the court.

The opinion was unanimous, though Justice Ming Chin disagreed with the use of the term “undocumented immigrant” as too vague and said the court should have used a more accurate “unlawful alien,” term to refer to Garcia’s status.