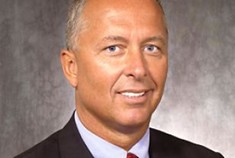 A former executive recruiter with Korn/Ferry Int., David Nosal, was sentenced to one year in prison Wednesday for a conspiracy to steal client lists from his former employer in order to set up his own recruiting firm.

Nosal, 55, of Danville, Calif., was convicted in April on six counts of conspiracy to steal trade secrets from Korn/Ferry after he convinced two other employees to download customer lists in 2005.  He hoped to gain access to the executive search firm’s files for large numbers of targeted job candidates developed by Korn/Ferry.

Federal prosecutors had asked for more than two years in prison.  Nosal’s defense lawyer Dennis Riordan had argued that probation would be more appropriate.

U.S. District Judge Edward Chen sentenced Nosal to a year in prison  and ordered him to pay a $60,000 fine.  There will be a future hearing on how much Nosal must reimburse Korn/Ferry.

The government did not demonstrate that Nosal benefited financially and he returned the lists to Korn/Ferry, Riordan argued.  “Their computers were not hacked into or damaged, and their source lists were returned,” he said in court papers.

But the prison sentence won’t stop Nosal from traveling to the Virgin Islands immediately after the sentencing.  Chen granted his request to travel for business from Jan. 8 to Jan. 12 to the Virgin Islands, but with a $500,000 unsecured bond.  The government did not object to the request.

Even before the trial got started, Nosal’s case went to the 9th U.S. Circuit Court of Appeals, which issued an 11-judge en banc opinion that forced the government to drop six counts of computer hacking.