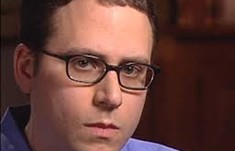 What appeared to be the high court’s reluctance during arguments in November to give Glass a second chance, became final Monday when the answer to his plea was an emphatic no.

The court accused him of “hypocrisy and evasiveness” in his testimony at the California State Bar hearing, calling it “particularly disturbing” that he persisted in claiming that he had made a good faith effort to work with the magazines that published his false works.

The court found the evidence supported that he went through “many verbal twists and turns” to avoid acknowledging to the New York bar that his level of assistance was exaggerated.

“Glass emphasized the remorse he expressed through his letters to victims, and characterized his novel and his appearance on 60 Minutes as efforts to make amends,” the court stated. “Remorse does not establish rehabilitation, however, and in any event, the weight of this evidence is diminished because the letters were not written near the time of his misconduct and exposure, when they might have been most meaningful to the victims, but rather seemed timed to coincide with his effort to become a member of he New York bar.”

Glass passed the state bar in 2006 and works as a law clerk in a private law firm.  He has been fighting for a license to practice ever since.  He failed in New York and now California has closed the door to him.

A move, “Shattered Glass” was made about his dubious exploits.

Glass began work at the NewRepublic in 1995 and began fabricating material the next year, according to the court.  It began with fabricated quotation from an unnamed source disparaging U.S. Representative Pete Hoekstra for behaving like an elementary school “super hall monitor.”

He began by making up quotes then moved to fabrication of entire articles, according to the court.  He also routinely prepared elaborate reporters notes and supporting material to give the false impression to magazine fact checkers that he had done the work.

In two particularly nasty articles, Glass had as a theme in one that Americans, particularly African-Americans, were no longer willing to work hard or take menial jobs. He fabricated characters, including a limousine driver and a taxi driver and one criminal.

The fictional African-American cab driver purported to say he drove a limousine instead because he was “sock of those curry people” and found that limos attracted beautiful women.

In the second article in 1997 he found that young, conservative Republicans had given up on electoral politics and turned to drugs and sex, citing fictional male college students.

The state Supreme Court reviewed a litany of lies of fabrications, followed by attempts to cover up by Glass.  It held that to admit a person to the bar when there have been serious or criminal misconduct is involved, the court must be convinced that the applicant is no longer the same person and has since behaved in exemplary fashion for a meaningful period.

That is not the case with Glass and his action, which constitute moral turpitude, the count found.