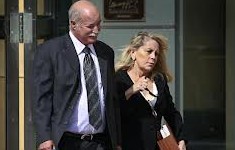 In what became known as the “Dirty DUI” scandal, a federal judge sentenced San Ramon divorce lawyer Mary Nolan to two years in prison Monday for illegally intercepting telephone conversations of the spouses of her clients.

Nolan, 61, pled guilty to a single count of intercepting phone calls with the aid of private investigator Christopher Butler and evading $400,000 in taxes.  U.S. District Judge Charles Breyer sentenced her to two years in prison, 240 hours of community service and $469,000 in restitution.  She must also resign her license to practice law.

She will surrender to federal Marshals March 6 to begin serving her sentence.  She has already paid the restitution, according to U.S. Attorney Melinda Haag.

Butler pled guilty in 2012 after admitting he installed listening devices by altering cell phones for 75 to 100 clients or their attorneys, according to prosecutors.  Nolan was charged with just one count of bugging a client’s spouse.  Butler was sentenced to five years in prison.

Nolan referred clients to Butler who would disable the ringer and speaker of a cellular phone, but leave the microphone active and setting it to automatically connect all incoming calls.  Butler would conceal the phones in the target’s car and provide the phone number to the client or Nolan.  Once activated, Nolan and another listener would call the number, which would silently connect the call and allow the listener to hear anything in the vicinity of the phone, according to the indictment.

The sentence is the latest in the string of crimes in the wake of the dirty DUI scandal in which Butler set up arrests of men in stings in Danville during 2010 and 2011.

The men were husbands of female clients embroiled in divorce and child custody disputes.  The men were allegedly enticed to get drunk in Danville bars by pretty women and then set up for arrest by cooperating police officers.