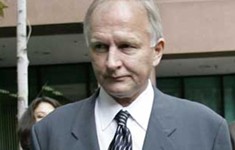 March 10, 2014 pammaclean Criminal, US Court of Appeals Leave a comment

The 9th U.S. Circuit Court of Appeals rejected Wilkes claims he was denied a fair trial by the government’s failure to give immunity to a defense witness and a declaration from Cunningham that Wilkes was innocent.

Referring to Cunningham’s declaration, Judge Milan Smith wrote, “Self-serving declarations by a convicted criminal, however, are unlikely to persuade a jury, especially where those statements are directly contradicted by Cunningham’s own sworn statements at his plea colloquy.”

Wilkes was convicted on 13 counts, including one count of bribing a public official, and sentenced to 12 years in prison in 2007.  He was ordered to pay $1.1 million in fines and forefeitures.

Cunningham, a former Republican from San Diego, pled guilty in 2005 to accepting more money, more often, than any other member of Congress in history — $2.5 million – from Wilkes, a defense contractor.

Cunningham was sentenced to eight years in prison and has been out of prison since 2013 after pleading guilty to conspiracy to commit bribery, mail fraud, wire fraud and tax evasion.

The Wilkes’ trial disclosed that his company, Automated Data Conversion Systems, sought and obtained Defense Department contracts based on his close ties to Cunningham.

The government produced 29 witnesses that said a significant number of bribes were paid by Wilkes to Cunningham.  The prosecutors also showed that ADCS failed to work as required in the DoD contracts.

The government granted Wilkes’ nephew, Joel Combs, immunity for his testimony about the company.  But it refused to give the same immunity to defense witness, Michael Wade, a consultant hired by Wilkes to help obtain the contracts.

The 9th Circuit rejected Wilkes claim that denial of immunity violated his due process and fair trial rights.

The panel also rejected his request for a new trial based on “newly discovered” evidence, including a declaration by Cunningham that Wilkes is innocent.

Judge Milan Smith wrote the court “is extremely confident that it does not in any way establish a probability of acquitting him” in a new trial.

Soon after his sentence, Cunningham said he regretted pleading guilty and that he only did so under pressure from his lawyers.

He told his sentencing Judge Larry Burns that he planned to live in a cabin in Arkansas, near his family and far from the San Diego Tribune reporters who first exposed the corruptions.

Joining Smith in the opinion are Judges William Fletcher and Paul Watford.