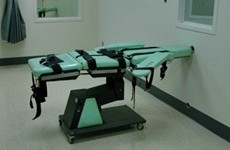 July 22, 2014 pammaclean Criminal, US Court of Appeals Leave a comment

[UPDATED] The U.S. Supreme Court lifted the stay of execution Tuesday in the Arizona lethal injection appeal by Joseph Wood. The 9th U.S. Circuit Court of Appeal imposed the controversial stay on the July 23 execution date finding Wood had a First Amendment right to know details of the drug suppliers and training of officers carrying out the execution.

In a dissent from the circuit’s injunction,  Chief Judge Alex Kozinski said yesterday he had no doubt the Supreme Court would lift the stay.

On Saturday, a three-judge panel of the court said, in a 2-1 vote, the public and Wood had a First Amendment right to know about the manufacturers and suppliers of the drugs, Midazolam and Hydromorphone, as well as the qualifications of those who will administer the lethal doses.

The entire 29-judge court was asked to vote to reconsider the decision en banc, but that failed to garner enough votes.  It was an unusually close vote.  Eleven of the court’s 29 judges voted to reconsider the stay.  A majority of 15 votes was required for a hearing.

(Interesting to note that if the vote had prevailed, it would be reconsidered by an 11-judge en banc panel, selected at random.  Clearly there are 11 votes on the court to lift the stay.)

Wood was convicted of shooting to death his girlfriend and her father in 1989.

Kozkinski issued his dissent in response to that denial.  He suggested that lethal injection was a “flawed” method of execution and perhaps states should consider firing squads. The switch from hanging, electric chairs, gas chambers and firing squads to lethal injection is “misguided,” he said
“Subverting medicines meant to heal the human body to the opposite purpose was an enterprise doomed to failure,” he said, pointing to Wood’s case as only the latest example.

The attacks on lethal injection will not stop for the simple reason “the enterprise is flawed,” he said.

Using drugs for execution “is a misguided effort to mask the brutality of executions by making them look serene and peaceful – like something any one of us might experience in our final moments.”

State should restore more primitive, and foolproof, methods if they wish to continue, he said.

The guillotine may be best but is “not part of our national ethos” and there are mishaps with hanging, the gas chamber and the electric chair.

“The firing squad strikes me as the most promising,” he said.

Executions are brutal, savage events and the state should not try mask that reality.

Ultimately, he said he was convinced the state of Arizona will prevail and the U.S. Supreme Court will lift the stay of execution.

Three judges did not participate in the vote:  Susan Graber, Mary Murguia and Andrew Hurwitz.

Last week, a federal judge in Los Angeles struck down California’s death penalty as “plagued by inordinate and unpredictable delay.”

Wood, 55, was sentenced to death 25 years ago for the murder of his estranged girlfriend and her father in a Tucson auto-body shop.

The defense argued the state deliberately concealed from Wood the details of his execution in violation of the public’s First Amendment right to be informed of the manner in which the state will execute him.