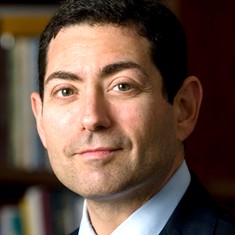 A Stanford University law professor who specializes in criminal and international law has been nominated as a justice on the California Supreme Court by Gov. Jerry Brown.

Mariano-Florentino Cuellar, 41, was nominated Tuesday by Brown to a spot on the high court.  Judging runs in the family. Cuellar is married to U.S. District Judge Lucy Koh in San Jose.

Cuellar was born in Matamoros, Mexico and for several years walked across the border each day to go to school in neighboring Brownsville, Texas.

Cuellar has been director of Stanford’s Freeman Spogli Institute for International Studies since 2013 and a professor of political science.

He also worked as co-chair on the Obama-Biden transition team’s Immigration Policy Working Group in 2008 and 2009.  He served as special assistant to Obama for Justice and Regulatory Policy at the White House Domestic Policy Council in 2009 and 2010.

He worked as co-chair of the National Equity and Excellence Commission created by Congress to help chose the achievement gap in American public schools from 2001 to 2013.

“Tino Cuellar is a renowned scholar who has served two presidents and mad significant contributions to both political science and the law,” Brown said.

He has taught administrative law, criminal law and international law at Stanford.

Cuellar also served as a law clerk for Judge Mary Schroeder at the 9th U.S. Circuit Court of Appeals from 2000 to 2001.

Cuellar’s cross-border schooling in Texas ended at age 14 when he moved with his family to Imperial Valley of California.  He received his law degree from Yale Law School and his undergraduate degree from Harvard College.  He also received a PhD in political science from Stanford University.

He would fill the vacancy created by the retirement of Justice Marvin Baxter set for Jan. 4, 2015.

If confirmed, Cuellar will appear on the November ballot for voter approval.