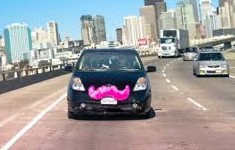 Advocates for the blind have sued Uber Technologies Inc. accusing the online ride-sharing service of refusing to transport the blind who use guide dogs and in one case putting a guide dog in the car trunk.

The National Federation of the Blind of California filed the federal complaint this week in San Francisco claiming the company, known for fuzzy pink mustaches on driver’s cars, violated the Americans with Disabilities Act and state civil rights law.

The suit alleges more than 30 blind customers nationwide have been refused rides by drivers for Uber.

“In addition, some UberX drivers seriously mishandle guide dogs or harass blind customers with guide dogs even when they do not outright deny the provision of taxi service,” according to the suit.  It cited the case of Leena Dawes, a blind rider in Sacramento whose dog was forced into the closed trunk of a sedan by the driver while Dawes was transported, then refused to stop so she could get the dog.

The suit also alleges that drivers charge cancellation fees after illegally denying service to blind riders and their guide dogs.

The complaint asked the federal court to order the company to reform its practices to make sure drivers don’t refuse rides to the blind.

Uber uses a mobile application to allow people to book rides with drivers who sign up with Uber to provide rides privately for a fee.  As the company has grown it has raised protests from U.S. taxi and limousine firms that see it cutting into their business.

The company begin in 2009 and gets a fee for the fares booked through its system.

Case:  National Federation of the Blind of Calif v. Uber Technologies Inc., No. 14-4086