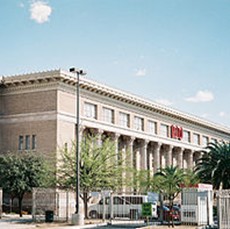 November 19, 2014 pammaclean Civil, US Court of Appeals Leave a comment

After 40 years of legal fighting over desegregation of the Tucson Unified School District, it was hard to understand why the state of Arizona so upset in federal appeals court arguments Wednesday.

But there the state was, at the 9th U.S. Circuit Court of Appeals, fighting for a seat at the table in order to challenge the potential use of ethnic studies classes for Latino and African-American students as one means to achieve racial equality.

The lawsuit began in 1974 and has had a desegregation settlement order in place since 1978. It was not until 2013 that a special master recommended and the court approved a complex plan to improve conditions at the schools for minorities.

In 2013, the New York Times reported that despite millions of dollars in public spending little has changed from black students, who are still among the lowest-performing students in the Tucson school district.  They are most likely to be suspended or assigned to special education, but least likely to join groups for gifted students, the Times said.

The plan to reform the schools, helped along by  a court-appointed special master,  includes dual language programs, better training and recruitment of teachers and changing curriculum to add ethnic materials about black and Latino students.

That’s where the political fight began.  The district first opposed the cirricula changes, but dropped its opposition in 2013.  That brought in the state of Arizona.  But when the federal judge refused to let the state intervene, Arizona dawdled and didn’t object in time.

Now it is appealing to be reinstated.

But Thomas Saenz, attorney for the Latino students argued, “The state made a decision to delegate the authority to develop curriculum to the schools.”  They have to live with it, he contends.

In a separate appeal in the case, the school district challenged the rules set out for it to object to parts of the plan adopted by the special master – in particular being limited to getting seven days to object and 10 pages to spell out the objects.  After 40 years?

Perhaps the most on point questions were asked by Judge Stephen Reinhardt during an overly long argument:  “When will the district plan be implemented.”  And, “Is the district objecting to any parts of the plan?”

It was expected the district would implement the plan by the 2016-17 school year – “but the district is behind schedule,” said Lois Thompson, attorney for the minority student plaintiffs.

Along with Reinhardt, the panel included Judges Sidney Thomas and Morgan Christen.