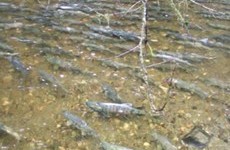 December 23, 2014 pammaclean Civil, US Court of Appeals Leave a comment

A federal appeals court has reinstated a conservation plan that calls for reducing water pumped from California’s Central Valley delta in order to protect endangered salmon.

The 9th U.S. Circuit Court of Appeals reversed a lower court Monday and sent the case back for imposition of the terms of a 2009 environmental review by the National Marine Fisheries Service (NMFS).

The ruling is a boon for environmental groups that intervened in the case to support the NMFS.

The plan to cut water use came from powerful state water agencies including Southern California’s Metropolitan Water District, a host of water districts in Stockton, KernCounty and the Westlands Water District.

The state’s Department of Water Resources also intervened in support of the districts.

But a three-judge panel of the 9th Circuit approved the original 2009 plan to reduce pumping.

Trial judge had found the NMFS violated the Administrative Procedures Act by holding the plan to reduce water was “arbitrary or capricious.”

“We hold that the district court did not give the NMFS the substantial deference it is due under the APA,” wrote Judge Richard Tallman for the panel.

Since the early years of the twentieth century, land owners, local irrigation districts and state and federal governments have pumped fresh water out of the San Joaquin and SacramentoRivers and their tributaries to irrigate farms and provide drinking water to 25 million Californians.

The NMFS found the level of pumping had endangered the the habitats of five species of anadromous fish, winter-run and spring-run salmon, steelhead, green sturgeon and orca whales.

Anadromous fish lay eggs in fresh water streams and rivers then hatchlings return to the sea to grow to adulthood and must  traverse the locks, pumping stations and dams.

Joining Tallman in the opinion were Judge Johnnie Rawlinson and visiting Judge Thomas Rice of the Eastern District of Washington.