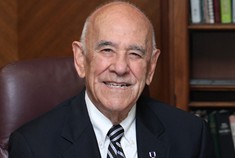 Judge Arthur Alarcon, who became the first Hispanic judge to serve on the 9th U.S. Circuit Court of Appeals, has died at the age of 89 after 50 years as a judge on the state and federal courts.

The man known for his booming laugh and gracious demeanor, died at his home in Pacific Palisades of cancer, Chief Judge Sidney Thomas said in a statement Thursday.

“We have lost a most gracious and dedicated colleague, who lived a life rich in California history, said former Chief Judge Mary Schroeder.

He spent 15 years as a state court judge in California and was appointed by Gov. Jerry Brown in 1978 to serve on the state Court of Appeal in Los Angeles prior to his appointment to the 9th Circuit by President Jimmy Carter.

Alarcon also served as head of the California Adult Authority.

While on the 9th Circuit Alarcon served as an active judge until taking senior status in 1992 but maintained a full caseload and continued to work for a time even after his diagnosis, without letting colleagues on the court know about his illness, the court statement said.

From 1963 to 1964 he was responsible for investigations to help the governor to decide whether to commute the death sentences of state prisoners.

His experience with capital cases led him to seriously question the efficacy of capital punishment.  In recent years he advocated for death penalty reform.

In 2011, he co-authored a study that found California taxpayers spent $4 billion on capital punishment since the death penalty was reinstated in 2011.  That is about $308 million for each of the state’s 13 executions carried out between 1978 and 2011.

The study outlined alternatives that included reducing death-eligible crimes for a savings of $55 million a year, fully preserve capital punishment with an added $85 million more in annual funds for courts and lawyers or abolish the practice to save $1 billion every five or six years.

Among his recent decisions, Alarcon wrote an opinion that reinstated the asylum claim of a Russian homosexual saying he had demonstrated that the Russian government was unable or unwilling to control private citizens who persecute homosexuals.

In 2009, he joined in a decision that allowed Alameda County to regulate gun shows on county-owned land.  The case was later reviewed twice en banc and ultimately the shows were allowed so long as guns were unloaded and secured by cables.

He served in the Army infantry as a sniper in Europe during World War II and received the Bronze Star and a Purple Heart.