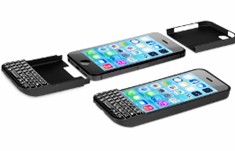 Typo Products must pay Blackberry $861,000 in sanctions for continued sale and promotion of products that violate Blackberry patents in violation of a preliminary injunction.

U.S. District Judge William Orrick Wednesday ordered Typo to pay the sanctions plus attorney fees and costs that arose from seeking the contempt of the court order.  Typo makes a keyboard that slips onto a smart phone and looks similar to Blackberry’s.

“Typo’s not so clever attempts to evade the court’s preliminary injunction is quite certain, and it is my obligation and intent to vindicate respect for and compliance with the court’s orders,” Orrick wrote.

Orrick issued an injunction March 28 barring Typo from distributing its add-on keyboard for the iPhone, which Blackberry alleges violates its patents.  Typo could not make, sell, import, market, promote or distribute the Typo Keyboard case.

Typo had argued that Blackberry had not shown it lost any sales as a result of Typo’s conduct and any sanctions would be an undeserved windfall.

Blackberry had sought $2.6 million in sanctions to reflect disgorgement of money received or owed to Typo from its alleged violations and tripling of the amount.

In addition, Orrick granted Blackberry’s motions to compel Typo to give additional depositions related to the violation of the injunction.