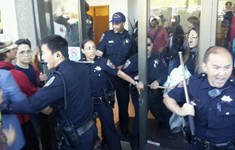 May 30, 2015 pammaclean Civil, US District Court Leave a comment

Five San Francisco police officers must face claims they brutalized and broke the wrists of a student protester during a demonstration over the fate of San Francisco Community College.

A federal judge Friday refused to dismiss the civil rights claims of student protester Otto Pippenger, a participant in the Save CCSF Coalition protest in 2014.

U.S. District Judge kept alive claims of First Amendment violation, false arrest and negligence claims against the officers. She did allow dismissal of false imprisonment and equal protection violation claims against police leaders, the school and its officials.

Pippenger and a group of students joined a protest over a decision by the Accrediting Commission for Community and Junior Colleges in 2012 to terminate CCSF’s accreditation.  In an attempt to salvage its accreditation, CCSF changed governance policies, cut programs, increased tuition, imposed layoffs and pay cuts.

A coalition of students, faculty and staff responded with demands for affordable education. In March 2014, Save CCSF organized a rally to call for resignation of trustees and reversal of the policies.  When protesters attempted to enter COnland Hall, as they had done the prior year in a peaceful protest, the SFPD and CCSF police responded “with unnecessary and excessive force, shoving and hitting numerous students,” according to the suit.

Pippenger was struck at least seven times, fracturing both wrists. One officer “body slammed” Pippenger to the ground, punched him in the back of the head and smashed his face into the ground, resulting in a concussion, according to the court.

During his detention, Pippenger alleges he was not provided medical aid.  He was bailed out the following day by his parents but continues to suffer post-traumatic stress, headaches, nightmares, flashbacks, anxiety and limited use of his wrists, according to the court.

The school claimed the following day that Pippenger was seen striking an SFPD officer.