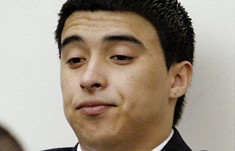 It didn’t make the appeals court happy, but the panel upheld former Gov. Arnold Schwarzenegger’s reduction of a manslaughter sentence for the son of former Assembly Speaker Fabian Nunez.

“We are compelled to conclude that, while Schwarzenegger’s conduct could be seen as deserving of censure and grossly unjust, it was not illegal,” the Third District Court of Appeal held Tuesday.

In his last day in office in January 2011, Schwarzenegger commuted Esteban Nunez 16-year sentence to seven years for his role in a knife attack that left a San Diego college student dead and wounded two others.

The deal benefited the son of Schwarzenegger’s close political ally.

Nunez joined in an attack on the unarmed young men because Nunez and his friends had been turned away from a fraternity party.

In 2008, Luis Santos, 22, was stabbed in the chest severing an artery in his heart.  He bled to death. Although Nunez did not stab Santos, during the fight he stabbed another young man in the abdomen and back, then stabbed a third man in the shoulder, according to the court.

Schwarzenegger’s decision to commute the sentence came as a surprise to the crime victims and the prosecuting attorney.  The Santos family sued, to challenge the commutation, arguing the 2008 Victims Bill of Rights Act requires notice to victims and an opportunity to be heard on parole or other post-conviction release.

The appeal panel reluctantly upheld a trial court holding that the law does not apply to the governor’s clemency decision.

The panel noted “back-room dealings were apparent.”  Nunez had appealed the criminal case, but signed a notice of abandonment and request to dismiss the appeal on Dec. 6, 2010 before the governor commuted the sentence. Schwarzenegger signed the commutation order Dec. 31, 2010.  On Jan. 2, 2011, his last day in office, he announced the decision.  The abandonment and dismissal request were filed after the grant of clemency – on Jan. 20, 2011, giving no notice to the victims or district attorney that commutation was being considered.

The court also pointed to what it called “Nunez’s self-serving letter to the court” in which he said he felt remorse “not for what he did, but for what happened. He blamed his codefendants for having ‘negative influences’ on him.”

He said he always intended to take responsibility for his actions, despite fleeing the scene and destroying evidence, according to the court.

In a Newsweek interview in April 2011, when asked about the Nunez commutation, the governor said, “Well, hello!  I mean, of course you help a friend.”

“As reprehensible as the Governor’s action in this instance might have been, it would be equally reprehensible to ignore the clear language of a constitutional provision,” the justices wrote.