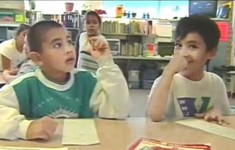 June 15, 2015 pammaclean Civil, US Court of Appeals Leave a comment

The 9th U.S. Circuit Court of Appeals held the state’s current programs constitute “appropriate action” under the Equal Education Opportunities Act. The panel also held that state and national funding of English language learner programs had changed substantially since 2000, when the state was first ordered to improve conditions.

The most significant change has been another controversial program approved by Arizona voters in 2000, Proposition 203.  It required all English learners to be placed in English language classrooms and taught only in English. The full immersion program covered 135,000 non-English speaking students, or roughly 15 percent of the Arizona schools in 2000, according to an Arizona State University study.

The proposition, which was modeled after California’s 1998 Proposition 227, ended the ability of school districts to create their own programs.

In 1992, the parents of English language learners in the Nogales Unified School District accused the state of “arbitrary and capricious” funding to teach non-English speakers the language.

A series of court rulings over the years resulted in finding state funding inadequate and ordered more appropriate funding levels.  The case went all the way to the U.S. Supreme Court in 2008.  The high court ultimately ruled in a 5-4 decision that sent the case back to Arizona for additional hearings and upheld the trial court action, finding the state in contempt for failure to follow earlier orders to establish a funding system “rationally related” to actual costs of ELL instruction.

The trial judge then dismissed the statewide funding claims finding changed circumstances and no violation of the EEOA.

On Monday, the 9th Circuit held the parents did not show Arizona was violating EEOA on a statewide basis and their allegations were insufficient to justify a statewide injunction over funding.

The appeals court concluded that the parents were actually challenging local implementation of a four-hour English Language Development requirement that they argued left non-English speakers behind their peers academically.

Students received less academic content during the school day than their peers, the parents argued.

In 2001, Congress passed the Bush Administration’s No Child Left Behind Act, which prompted the trial judge to extend the original judgment against Nogales statewide.