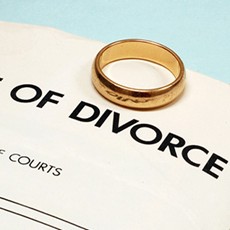 The relationship may be dead, but if a married couple lives in the same house together they cannot be considered separated and thus allowed to keep their separate earnings, the California Supreme Court has decided.

The ruling last week has monetary consequences for both partners. The date of a couple’s separation is frequently the subject of disputes in divorces, particularly for couples who cannot afford to set up separate households.

Family courts generally view financial transactions made “during marriage” as joint decisions.  The benefits and consequences are shared equally.

By contrast, the good and bad financial circumstances “after separation” but before the divorce judgment, generally fall on the person making a specific transaction.

The dispute arose after Sheryl Davis told Keith Davis that she was “through” with their marriage in June 2006, but did not file for divorce until December 30, 2008. The couple remained in the home together until July 2011. In August 2006, Sheryl and Keith took a vacation to Hawaii with their children, and continued to celebrate birthdays and holidays as a family.

Between Sheryl’s announcement that the marriage was over and her filing of the petition, she began working full-time, thus substantially increasing her earnings. Keith quit his job. In court documents, Sheryl listed the parties’ date of separation as June 1, 2006. Keith initially claimed January 2009 as the date, and later amended his claim to July 2011.

Chief Justice Tani Cantil-Sakauye said that the plain language of the statute stating that couples are separated when “living separate and apart” suggests that an intent to end their marriage is insufficient to establish their date of separation.  Cantil-Sakauye said the legislature intended that language be taken literally.

At least one prior California case allowed a divorcing couple to live apart but not be deemed separated in the eyes of the law. But that court left open the possibility that some spouses could be considered separated while living under the same roof.

Cantil-Sakauye did lend hope to divorcing comples who want to end the marriage but cannot afford to set up two separate households.

She said in a footnote: “Under the facts presented by this case, we have no occasion to consider, and expressly reserve the question, whether there could be circumstances that would support a finding that the spouses were ‘living separate and apart,’ i.e., that they had established separate residences with the requisite objectively evidenced intent, even though they continued to literally share one roof.”