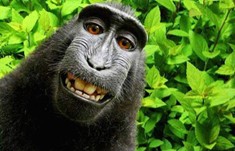 Animal rights activists at PETA want to give a whole new meaning to the phrase monkey business – as in, suing for a monkey’s copyrights to his own selfie.

PETA, People for the Ethical Treatment of Animals, went to federal court in San Francisco this week to assert that nature photographer David Slater cannot claim ownership of selfies a crested macaque shot with Slater’s camera.

The lawsuit is on behalf of Naruto, a 6-year-old crested macaque who lives in a Sulawesi, Indonesia nature preserve.

In 2011, Naruto took Slater’s camera and shot some self-portraits using the camera and they quickly became famous as “money selfies,” which Slater published his book “Wildlife Personalities” in 2014.

PETA claims that Slater and his publisher have to right to the photos, which they say belong to Naruto.

The photos have been posted in the public domain by Wikimedia, which has declined to take them down asserting that on one can own the copyrights to the monkey-made photos. They remain there despite Slater’s own copyright claims to the photos.

Slater wrote that the monkey made “several funny faces” while taking the photos.

PETA argues Naruto was creating an artistic expression when he took the photos.

PETA wants the right to administer and protect Naruto’s rights in the Monkey Selfies on the condition that all the profits by Slater be disgorged and used for the benefit of Naruto and the macaques and to preserve their habitat.

That, of course, presumes Naruto can’t balance a checkbook.