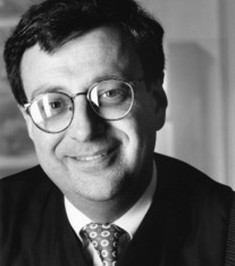 October 15, 2015 pammaclean US Court of Appeals Leave a comment

Federal appellate Judge Barry Silverman will take senior status in October 2016, after 18 years on the court, opening the door to another appointment to the 9th U.S. Circuit Court of Appeals by President Obama.

Silverman, 64, of Phoenix, was appointed to the 9th Circuit in 1998 by President Bill Clinton.  Silverman announced his plans to step down from active status next year.  He has been a judge on federal and state courts for 37 years.

One of Silverman’s better known opinions was actually a dissent.  He objected to a 2002 ruling that would have recognized a male prisoner’s constitutional right to procreate and mail their sperm from jail. ‘This is a seminal case in more ways than one,” Silverman wrote. He said the majority decision would allow inmates to “procreate from prison via FedEx.”

The full court later took up the issue and overturned the decision, supporting Silverman’s view, and the Supreme Court let the case quietly die.

In 2013, he wrote a non-precedential decision that a law prohibiting a felon from possessing a gun is not a violation of the Second Amendment.  And Silverman currently sits on an 11-judge panel considering a challenge to a San Diego law that requires people to show a “good cause” why they need a permit to carry a gun in public.

That highly anticipated ruling is likely to come down before he leaves the bench.

Silverman was born in the Bronx in New York and his family moved to Arizona when he was a teenager.

In 1988, he also received a “Dishorable Mention” in the Bulwer-Lytton Fiction bad writing contest sponsored by San Jose State University.

“It has been the honor of my life to have served the nation and the people of Arizona as a member of the judiciary,” he said in a prepared statement.

Silverman may continue on the bench as a senior judge with a reduced caseload.