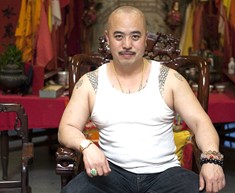 In the latest defense bid to get Raymond “Shrimp Boy” Chow out of his legal troubles, his lawyers want trial Judge Charles Breyer to step off further participation in the case, alleging a conflict of interest on the part of the judge.

The court filing Friday also calls for setting aside a January 8 jury verdict that found Chow guilty on all 162 counts, including murder conspiracy, racketeering and other gang-related crimes.

The motion comes on the same day a former San Francisco Human Rights Commissioner and former staffer for the commission were accused of soliciting $20,000 in campaign contributions in exchange for political favors from Mayor Ed Lee.  The payments allegedly came from an undercover FBI agent who was also investigating Chow in the racketeering case.

The mayor has not been charged with any crime.

Also charged was former San Francisco school board President Keith Jackson, who is a political consultant. Jackson has earlier pleaded guilty to racketeering in the federal case against Chow.

Chow’s attorney Tony Serra, in papers filed in Chow’s federal case, argued that Judge Breyer should have stepped off the case because his wife serves as director of the city’s non-profit City Arts and Lectures program, which received an annual grant of nearly $50,000 from Mayor Lee’s budget allowance.

Breyer’s failure to disclose an alleged conflict “gave the appearance of judicial impropriety,” Serra argued.  Breyer had been authorizing wiretap applications in the political corruption portion of the Chow case as far back as 2012, the court papers state.

Serra said the alleged $20,000 in illegal campaign contributions were detailed in FBI affidavits presented to Breyer in 2012-2013 and the judge authorized wiretaps on “a dozen or more local politicians and community leadership.”

Chow’s legal teams casts Breyer’s failure to step off the case as creating an “appearance of impropriety” when “the black and white pages of the wiretap applications specifically identifying Ed Lee as participating in acceptance of bribes along with an FBI agent’s sworn statement in the belief that probable cause existed that Ed Lee was participating in criminal conduct.”

Then the defense argued Lee “vaporized” from the FBI investigation, which the defense suggests means that “someone” other than prosecutors of the FBI intervened.

In a separate statement by defense lawyer Curtis Briggs, who signed the motion, he found no evidence that Judge Breyer’s wife acted unethically or illegally and “I am in no way implying anything of the sort.”

Briggs and Serra asks that Breyer voluntarily recuse himself from Chow’s case.

Chow, once praised as a reformed gang leader by city politicians following his 2003 prison release, was convicted earlier this month of ordering the killing Allen Leung, the head of a Chinese Chee Kung Tong, clearing the way for Chow to assume power as “Dragonhead” of the group.

He was also convicted of conspiring to murder a rival, Jim Tat Kong, five counts of trafficking in stolen alcohol and cigarettes and 154 counts of money laundering.

Chow is scheduled to be sentenced March 23 and faces a mandatory life prison term.

In July, Sen. Yee admitted that with Jackson’s help he accepted bribes from the undercover agents posing as contributors in exchange for promised political favors and help importing guns illegally.