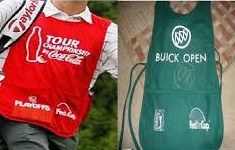 Caddies on the pro golf tour may have legitimate complaints about poor treatment by the tour, but their antitrust lawsuit over the commercial-covered bibs they must wear doesn’t, a federal judge ruled Monday.

The caddies began their litigation in 2015 after a high-profile example of neglect by the PGA. During a thunderstorm-driven suspension of play, the public and players were permitted to go indoors while caddies were left to find refuge in an open metal shed or their cars.

Some 168 caddies sued the PGA Tour contending they should not be required to wear bibs with ads for Coca-Cola and other major advertisers but if they are they should be compensated for a share of the publicity provided.

They argued the PGA rule violated their “right of publicity” and federal antitrust and trademark law.

But Chhabria pointed out caddies have been required to wear the bibs for decades, in essence as part of their uniform.

As caddies carry the clubs for their assigned pro player the bib has a corporate logo on the front and the name of the player the caddie works for on the back.

The contracts the caddies sign with the PGA require them to wear bibs.  Chhabria said the caddies have thus consented to the use of their images at tournaments and may not claim either violation of California’s statutory or common law right of publicity.

He similarly dismissed antitrust, contract violation and duress claims by the caddies.

“The caddies overall complaint about poor treatment by the Tour has merit, but this federal lawsuit about bibs does not,” Chhabria wrote.