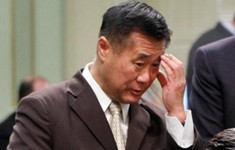 Former California Sen. Leland Yee was ordered to prison for five years Wednesday, for selling his votes to the highest bidder.

The sentence was less than the eight years sought by prosecutors and Yee was not immediately whisked away to jail but was allowed to leave the courtroom after the sentencing by U.S District Judge Charles Breyer. He must also pay a $20,000 fine.

He was ordered to surrender by March 25 to U.S. Marshals to begin his sentence.

Yee, 67, pled guilty to racketeering last year in a scandal of bribery for political favors that included attempted arms sales.

Yee fell from political office in 2014 after his indictment and arrest in what prosecutors described as a man who “sold his vote to the highest bidder.” He sought leniency based on his public humiliation and the serious illness of his wife and his past record of public service.

Prosecutors described the sordid details of bribery and attempted arms deals by the San Francisco Democrat who once introduced legislation to criminalize the sale of violent video games to children.

Yee was secretly recorded in 2014 setting up a deal between an undercover agent to buy automatic weapons and shoulder fired missiles from a purported Russian arms dealer in shipping container-sized quantities.

“As to the weapons, Yee said he was ‘agnostic,’” according to a government sentencing memorandum sent to Breyer. “People want to get whatever they want to get,” Yee was recorded saying. “Do I care? No, I don’t care.”

He was attempting to set up a deal for millions of dollars-worth of automatic weapons to be shipped from the Philippines to New Jersey, in exchange for campaign contributions in his run for Secretary of State, according to prosecutors.

“The offenses committed by Yee were no one-time straying by a public official from lawful and ethical conduct,” wrote Acting U.S. Attorney Brian Stretch. “They were a string of numerous serious illegal acts over a period of three years that ended only when Yee and (co-defendant Keith) Jackson were arrested,” he said.

Among the bribery and extortion schemes alleged by the government, Yee wanted a $10,000 donation to clear up his remaining debt from his failed San Francisco mayoral race and in exchange would make calls to the Dept. of Public Health on behalf of a company trying to get state contracts.

FBI investigators stumbled on another scheme while monitoring wiretaps of Yee.  In this instance, he planned to extort money from an individual affiliated with the California State Athletic Commission (CSAC) by suggesting he would vote against a pending bill to extend the life of the CSAC, unless he got campaign money.

In another instance in 2013, the government alleged Yee met and worked with an undercover agent pretending to be an Arizona businessman who wanted to expand his medical marijuana business to California and was willing to pay Yee for his support for legislation that would facilitate the business.

Yee also admitted he agreed to provide a certificate on California State Senate letterhead honoring the Chee Kung Tong, run by Raymond “Shrimp Boy” Chow, a gang leader indicted with Yee and convicted this year of a murder conspiracy and a host of other charges.