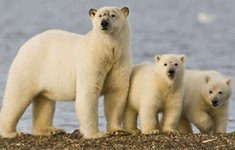 February 29, 2016 pammaclean Civil, US Court of Appeals Leave a comment

In a defeat for the oil and gas industry, a federal appeals court said climate change may be considered in Alaskan polar bear habitat designations by the U.S. Fish & Wildlife Service Monday.

The Alaska Oil and Gas Association argued that future climate change was not an appropriate consideration under the Endangered Species Act in the FWS designation of protected habitat along Alaska’s coast and North Slope areas critical to the bears, according to Judge Mary Schroeder of the 9th U.S. Circuit Court of Appeals.

The industry argued that the FWS relied on “mere speculation that climate change would cause land with [primary protected elements] to erode in the future,” Schroeder said. “The record belies these contentions,” she said. “The very climate factors that plaintiffs now criticize are those that the D.C. Circuit took into account in approving the listing of polar bears as threatened,” she said.

The FWS drew fire from oil and gas trade associations, several Alaska Native corporations and the state of Alaska for its 2008 designation of critical habitat for declining polar bear populations. The groups argued the 187,000 square miles of critical habitat in the southern Beaufort Sea and the Chukchi-Bering Sea was too large.

The FWS published a final rule in 2010 breaking down the critical habitat into three areas; sea ice habitat, used by the bears for hunting; land used for denning and barrier islands and waters within one mile of them considered “no-disturbance” zones.

The appeals court overturned the district court decision favoring the industry and held instead that the FWS designation of polar bear habitat was not arbitrary, capricious nor did it violate the Endangered Species Act.

In particular, the appeals court upheld the designation of land used for denning by the bears and that the no-disturbance zones provided refuge from human interference.

The case was sent back to the district court in Alaska.

Schroeder was joined by Judges Johnnie Rawlinson and Mary Murguia.