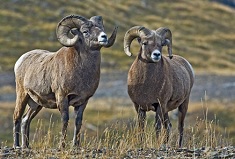 March 2, 2016 pammaclean Civil, US Court of Appeals Leave a comment

Bighorn sheep have experienced major die-offs since 1870, which coincided with the start of wide-spread grazing of domestic sheep and the transfer of diseases to the bighorns. In response, the U.S. Forest Service prepared an environmental plan in 2008 that would close 70 percent of Idaho’s Payette National Forest to sheep grazing.

The Idaho Wool Growers Association and other state and national trade groups challenged the ban.

Wednesday, the 9th U.S. Circuit Court of Appeals upheld the USFS plan saying the agency did not act arbitrarily or capriciously and that the public was able consider the information and provide input.

Between the 1800s and early 1900s, bighorn sheep in North America were decimated. The population high of 1.5 million to 2 million dropped to 10 percent of that number, the court said. Scientists generally attribute it to over-harvesting, habitat loss, competition for food and diseases transmitted from domestic sheep.

In Idaho’s Payette forest, two populations of bighorn sheep, in Hells Canyon and the Salmon River Mountains, have experienced major die-offs since 1870, when domestic sheep were introduced for grazing.

The large-scale die-offs of all ages of bighorns has continued to this day. Despite efforts in 1981 to transplant bighorn sheep from elsewhere, total populations have decreased in the Payette by 47 percent. While 10,000 bighorn lived in Hells Canyon in the 1940s, just 850 sheep remained when the USFS wrote its environmental plan. In particular, the researchers assert pneumonia is transferred from sheep to the bighorn.

Then plan released in 2008 received 14,000 public comments. Following updates and revisions published in 2010, the USFS received another 11,000 comments, but the plan to curtain domestic sheep went ahead.

The wool growers sued after the plan was approved alleging violation of the National Environmental Protection Act (NEPA). They argued it should have been amended to indicate uncertainty about the disease transmission mechanisms among other arguments.

Judge Marsha Berzon wrote that the USFS did not act arbitrarily in refusing to change its study. “The disease model was used for a limited purpose, and, for that purpose, was sufficiently grounded in scientifically acceptable methodology to shed some light on the choice of an appropriate management plan,” Berzon said.

She was joined by Judges Raymond Fisher and Paul Watford.