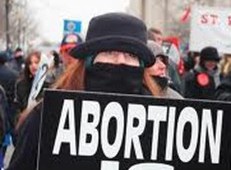 June 16, 2016 pammaclean Civil, US Court of Appeals Leave a comment

Four anti-abortion crisis pregnancy centers have asked a federal appeals court to declare unconstitutional  California’s law mandating that the centers tell women about the availability of low-cost or free abortion and contraception.

“The state wants women to be told all available options, even abortion, and for my clients that is not the best way to deal with pregnancy and the state cannot force the opposition to speak that position,” Francis Manion, attorney for the Pregnancy Care Center of the North Coast, told the 9th U.S. Circuit Court of Appeals Tuesday.  “It is antithetical to the First Amendment,” he said.

In 2015, California passed the Reproductive Freedom, Accountability, Comprehensive Care and Transparency Act, FACT Act, to regulate the 300-plus pregnancy centers in the state.

Under the FACT Act the centers must notify their patients about how to obtain birth control and abortion services.  The state’s concern grew out of the rising number of crisis pregnancy centers that often opened near abortion clinics and present themselves as providing a range of pregnancy services, but often offer limited or no medical service and have provided factually discredited information to women with unwanted pregnancies.

They advertise to women who believe they may be pregnancy, to provide pregnancy tests, adoption information and financial help for baby clothes and supplies.  They also strongly discourage abortion, according to the state.

The FACT Act requires that the clinics post signs that say California provides immediate free or low-cost access to family planning services, including contraception, prenatal care and abortion and include a phone number.

For the 60 percent of these clinics that have no medical license, they act also requires that they state it has no licensed medical provider to over services, according to the state.

They appealed after four trial court rulings rejected their efforts to block the law.

“The attorney general and the lower court seeks to expand the doctrine of professional speech, but the FACT Act does not apply to a professional,” said Kevin Snider, attorney for Women’s Friend Pregnancy Resource Center.

“We believe the effort to greatly expand professional speech is a plank this court should not walk out on,” he said.

Deputy Attorney General Jon Eisenberg, representing the state, said the unlicensed facilities must give notice if they provide ultrasound tests, pregnancy tests, advertise for these or collect health information.

“These are the kinds of services lay people think are provided by licensed professionals and the state wants to make sure women who patronize them know they are not license health care facilities,” Eisenberg argued.

“The law makes sure women know who they are dealing with when they face the grave consequences of when they are pregnant,” he said.

The three-judge panel, Judges Dorthy Nelson Wallace Tashima and John Owens, focused most of their questions on the level of legal scrutiny that should be applied to the state’s regulation.

The court is expected to issue a ruling in the coming weeks.