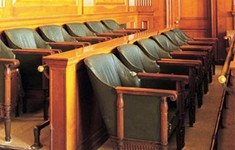 August 26, 2016 pammaclean Criminal, US Court of Appeals Leave a comment

A juror allegedly engaged in regular texting to a judge friend about the trial and then relayed the judge’s information to the jury, but a split federal appeals panel said that there was no need to investigate for misconduct and upheld the jury’s murder conviction.

Despite the troubling juror conduct, the 9th U.S. Circuit Court of Appeals said, in a 2-1 vote Thursday, the jury verdict did not violate constitutional due process rights for Enrique Godoy, who was convicted of second degree murder.

Godoy was convicted of knifing a former friend to death during a fight over marijuana. Godoy was at his Los Angeles apartment when the victim, Chasen Pacheco, appeared on the street and asked Godoy to come downstairs to hash it out. Godoy and Pacheco fought, Godoy went back inside after being pulled away from Pacheco. He later returned as Pacheco continued to talk to him. Godoy stabbed Pacheco three times, according to the court.

Jurors convicted Godoy of second degree murder in 2006. His lawyer sought a new trial but missed a deadline for the request. Despite that, the attorney argued a juror had texted a judge during deliberations and shared information with jurors. The prosecution contended the information pertained only to procedural questions, not matters related to deliberations, evidence or the verdict.

The trial judge refused to delay the new trial review to give time to investigate the alleged juror misconduct.

The court upheld dismissal of his habeas claim and his challenge of the trial judge’s refusal to grant an evidentiary hearing into the jury conduct.

“In light of the broad discretion accorded to trial courts, a fairminded jurist could easily conclude that the state Court of Appeal’s affirmance of the trial judge’s denial of Godoy’s motion for continuance was not unreasonable,” wrote Judge Diarmuid O’Scannlain for the majority. He was joined by Judge Jay Bybee.

In dissent, Judge Raymond Fisher said, “When a sitting juror is alleged to have continuously texted a judge friend about the trial and relayed the judge’s information to the jury, the majority concludes the trial court need not investigation further – and the jury verdict would not violate due process. I disagree.”

Jurors are expected to decide a case solely on the evidence before it at trial, he said. The majority distorted the purpose of the Antiterorrism and Effective Death Penalty Act of 1996 and created needless conflicts with other 9th Circuit precedents and those of other circuits, Fisher said.