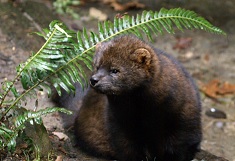 Environmentalists sued the U.S. Fish and Wildlife Service Thursday in a fight to save the dwindling Pacific Fisher population, contending the agency illegally abandoned a court-ordered deal on “threatened” status fo these rare bushy-tailed weasels.

The Pacific Fisher, unlike its name suggests, does not fish or live near the ocean. It is a small furry member of the weasel family, closely related to minks and martens. It hunts small birds and mammals and was once spread widely over deep forests in northern California and the Pacific Northwest.

After decades of deforestation, fur trapping and poisoning, the Fisher is left in two small ranges of the southern Sierra and the Klamath-Siskiyou region along the California-Oregon state line.  Some have been reintroduced to the Olympic Peninsula as well.

The lawsuit by the Center for Biological Diversity, and a host of other groups, alleges that in 2014, after 14 years of “illegal foot-dragging” and repeated trips to court, the FWS proposed a rule that would protect the Pacific Fishers as a threatened species under the Endangered Species Act (ESA).

The proposed rule concluded that the animal was likely to become endangered throughout their range. Under a court-ordered settlement, the FWS had until October 2015 to adopt a final rule listing the fishers as threatened.

But in April 2016, the agency failed to produce a final rule and withdrew its proposed rule, leaving the Pacific Fisher unprotected in violation of the 2014 settlement, the lawsuit alleges.

FWS has found the Fishers live in remote locations and are seldom documented or even encountered by humans. They were once broadly distributed in Washing, Oregon and California, from the southern Sierra Nevada north through the Cascades and Olympic Peninsula. The estimated populations range from a low of 250 to 4,000 in the California/Oregon area and from 100 to 500 in the southern Sierra Nevada.

Case: center for Biological Diversity, US Fish and Wildlife Service, No. 16-6040DMR