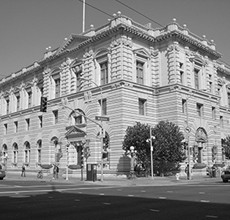 February 16, 2017 pammaclean Civil, US Court of Appeals Leave a comment

The 9th U.S. Circuit Court of Appeals judges has halted voting on whether to reconsider the President’s travel ban at the request of the Trump Administration, pending issuance of a new version of the ban.

The appeals court Thursday agreed to an administration request that it stop its vote on whether to reconsider the stay that had halted enforcement of the travel ban.  The decision gives the President time to issue a new order that may be more in line with the constitutional holdings of the court.

The administration agreed to inform the court of any new developments on the revised order.

A unanimous three-judge panel of the appeals court agreed to keep the travel ban on hold while more evidence was gathered by the state of Washington, which contends the order was unconstitutional.

The three-judge panel of the appeals court agreed that the state was likely to prevail on its claim and that it was likely to cause serious injury to the affected aliens and thus upheld the order blocking the travel ban.

The court said, “We hold that the government has not shown a likelihood of success on the merits of its appeal, nor has it shown that failure to enter a stay would cause irreparable injury, and we therefore deny its emergency motion for a stay.”

Judges William Canby, Richard Clifton and Michelle Friedland issued the order together without designating which judge wrote the opinion. Canby was appointed by President Carter, Clifton by President George W. Bush and Friedland by President Obama.

Then an unidentified federal appellate judge last week called for a full court vote on whether to have an 11-judge panel reconsider the stay of the Trump Administration’s travel ban.

Such a panel is known as en banc review. It would take a majority vote of the 25 active judges on the 9th Circuit to grant a rehearing. If a majority agrees to rehear the case then an 11-judge panel would be selected to reconsider the stay order.

Ten members of the en banc panel are selected by random draw and the 11th judge is always the chief judge of the court. The chief judge is currently Judge Sidney Thomas, an appointee of President Bill Clinton.