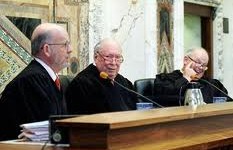 March 15, 2017 pammaclean Civil, US Court of Appeals Leave a comment

A minority of judges on the 9th U.S. Circuit Court of Appeals wanted to void the original three-judge decision upholding the Seattle stay of Trump’s first travel ban, but they lost a vote by the 25-judge court.

The vote has no practical effect on the current travel ban stay issued in Hawaii Wednesday, but it does provide a hint that a majority of the court may be sympathetic to Hawaii’s order. It also gave Judge Stephen Reinhardt an opportunity to take a swipe at Trump. Here’s how that works.

Behind closed doors, the judges called for a vote on whether to vacate or overturn the stay order. This required a majority of the 25-judges to approve and send the issue to an 11-judge review panel, known as an en banc review.

On Wednesday, the appeals court issued an order saying that vote failed and the three-judge opinion would remain in place.

In a concurring opinion, Judge Stephen Reinhardt said he thought the court should leave the order alone. Then he went farther, taking a not so subtle swipe at the Trump Administration.  He wrote, “I am proud to be a part of this court and a judicial system that is independent and courageous, and that vigorously protects the constitutional rights of all, regardless of the source of any efforts to weaken or diminish them.”