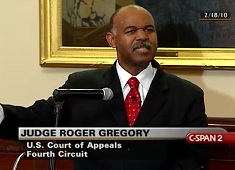 May 25, 2017 pammaclean Civil, US Court of Appeals Leave a comment

Saying the context of the order “drips with religious intolerance,” the 4th U.S. Circuit Court of Appeals said it could take into account the President’s prior campaign statements calling for a “Muslim ban” made during the 2016 election campaign. That action resolved a major legal question of whether candidate statements could be considered by the court.

“To the extent that our review chills campaign promises to condemn and exclude entire religious groups, we think that a welcome restraint,” wrote Chief Judge Roger Gregory.

The majority ruling is based on the Trump Administration’s second and revised executive order issued March 6. The majority found it violated the Constitution’s Establishment Clause in the First Amendment, which bars government acts that establish a religion.

The ruling is one of two expected from federal appeals courts. Also pending is a 9th U.S. Circuit Court of Appeals case from Hawaii.

The question for the court was whether an 1866 U.S. Supreme Court decision remained good law and whether several Middle East and Muslim civil rights groups and individual Muslims had the right to challenge an executive order that “speaks with vague words of national security, but in context drips with religious intolerance, animus, and discrimination,” Gregory said for the majority.

“Congress granted the President broad power to deny entry to aliens, but that power is not absolute. It cannot go unchecked when, as here, the President wields it through an executive edict that stands to cause irreparable harm to individuals across this nation. Therefore, for the reasons that follow, we affirm in substantial part the district court’s issuance of a nationwide preliminary injunction as to Section 2(c) of the challenged Executive Order,” Gregory wrote.

At one point, Gregory pointed out the administration’s argued that a doctrine known as consular nonreviewability meant the court had no power to review Trump’s order. Behind that argument “lies a dangerous idea,” Gregory warned, “that this court lacks the authority to review high-level government policy of the sort here.”

He cited back one of the nation’s most historic cases, Marbury v. Madison, the 1803 decision that recognized the authority of the courts to determine what the law is.

“We find that plaintiffs have more than plausibly alleged that [the second Executive Order’s] stated national security interest was provided in bad faith, as a pretext for its religious purpose,” Gregory wrote.

Originally, Trump issued the order on January 27, after one week in office, suspending entry to the  U.S. for 90 days of immigrant and nonimmigrant entry of foreign aliens from Iraq, Iran, Libya, Somalia, Sudan, Syria and Yeman.

The action created havoc at airports around the country as people traveling with previously issued visas and even green cards were turned away. This included some who lived in the U.S. and were simply returning from trips abroad.

The order was blocked by a federal judge in Seattle and the 9th Circuit upheld the order. Trump then revised the order and issued the amended version on March 6, which eliminated Iraq from the ban and applied the ban to foreign nationals living outside the U.S.

The majority decision recites the litany of Trump’s campaign statements and tweets that promote a ban on Muslim’s and when criticized called for the ban to be directed at “territories.”

The majority found the evidence showed that the revised executive order, from the standpoint of a reasonable observer, creates a compelling case that its “primary purpose is religious.”

In dissent, Judge Paul Niemeyer, joined by Judges Dennis Shedd and Steven Agee, argued the plaintiffs lacked the standing to even bring the lawsuit and that the majority over-extended the reach of the Establishment Clause.  Shedd and Agee also wrote their own separate dissenting opinions.