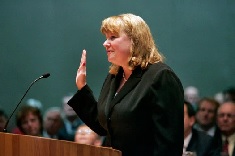 Along with Eids, Trump nominated two other appellate judges, three nominees to the Court of Appeals for Veterans Claims, four people to federal trial courts and one to the federal court of claims.

Trump previously has included Eid on his list of individuals that he would consider as a Supreme Court nominee. She has served as a law clerk to Supreme Court Justice Clarence Thomas and was praised by Trump in the past as a standing up for school choice reforms and small government.  In fact in 2006, Thomas wrote to Colorado Gov. Bill Owens recommending Eids to the state high court.

She has previously served as Colorado’s Solicitor General and an associate law professor at the University of Colorado School of Law.

Trump also nominated University of Pennsylvania Law School criminal law professor Stephanos BIbas to the 3rd Circuit Court of Appeals,  whick is based in Philadelphia.  He was a former federal prosecutor in New York and a law clerk for Supreme Court Justice Anthony Kennedy.

U.S. District Judge Ralph Erickson of North Dakota was nominated to a vacancy on the 8th Circuit Court of Appeals, which covers the Midwest and is based in St. Louis.

Erickson has served as a trial judge since 2003 and is currently chair of the U.S. Sentencing Commission’s Tribal Issues Advisory Group.

The other nominees include:

Dabney Friedrich and Timothy Kelly, both of Washington, D.C., Trevor McFadden of Virginia and Stephen Schwartz of Virginia, to service as district judges for the District of Columbia trial court. Friedrich previously served as associate counsel to President George W. Bush and crime counsel to Sen. Orrin Hatch.

McFadden is a deputy assistant attorney general in the criminal division of the Department of Justice. He also spent a decade as a federal prosecutor.

Schwartz is a partner at Schaerr Duncan in Washington, D.C., who litigates civil and constitutional law matters.

Also nominated to the U.S. Court of Appeals for Veterans Claims were Michael Allen of Florida, Amanda Meredith of Virginia, and Joseph Toth of Wisconsin.

Allen is a professor of law and director of the Veterans Law Institute at Stetson University College of Law in Florida, and an expert on veterans affairs.

Meredith serves as general counsel of the Senate Committee on Veterans’ Affairs.

Toth is a veteran of the Judge Advocate General Corps of the Navy and has served as an officer in Afghanistan to work with Afghani’s to establish the rule of law.

Finally, Claria Horn Boom of Kentucky was nominated to serve as a trial judge in the Eastern and Western Districts of Kentucky.  She is currently a partner at Frost Brown Todd. She is a former federal prosecutor.