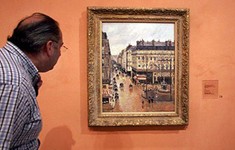 July 10, 2017 pammaclean Civil, US Court of Appeals Leave a comment

The great-grandchildren of the owner of a French Impressionist painting by Camille Pissarro, which was stolen by Nazis in 1939, have won the right to a trial on their claims of ownership in a federal appeals decision Monday.

The 9th U.S. Circuit Court of Appeals rejected a lower court decision the Thyssen-Bornemisza Collection Foundation had acquired title to the painting under a 1955 Spanish law and that the painting’s ownership was a triable issue.

Lilly Neubauer was forced to sell her Pissarro painting in 1939 to a Berlin art dealer working for the Nazi government because the Nazis refused to allow her to leave Germany with it.  She sold it for $360 in Reichsmarks, which were deposited in a blocked account, according to Judge Carlos Bea.

Neubauer fled to England and after the war sued to get the painting back. But the painting, a Paris street scene in the rain, could not be located and the family assumed it was destroyed.

But the painting survived and made its way from Germany to Holland and then the U.S., where it was owned by collectors in Los Angeles and St. Louis. In 1976, it was sold to Baron Thessen-Bornemisza, a Swiss art collector, for $275,000.

In 1993, Spain purchased his entire collection of 775 paintings for $338 million and put them on display in a museum.

In 2000, Neubauer’s grandson, Claude Casssirer, of La Mesa, learned that the painting was in Spain and he wrote the Spain’s culture ministery in 2001 asking for its return.

Spain refused saying that Neubauer had been compensated in 1958 and thus had relinquished her rights. Cassirer died in 2010 and his children have continued the legal fight.

A number of treaties, signed by a host of countries including Spain, have recognized the right of Jews who fled the Nazis to claim for return of looted art.

The case has been back and forth in the 9th Circuit three times. In this latest ruling the issue is the sale of the painting by the Baron in 1993 to the museum in Madrid and whether the Baron had legitimate title to the painting at that time.

The appeals court reversed the summary judgment in favor of the Spanish museum and instead found the Neubauer family had made a claim within six years of learning of its existence, as required by US law governing claims for art expropriated during the Holocaust.

In so doing, the court applied that 2010 law retroactively to the Neubauer claim, which was filed five years prior to passage of the law.

As for the 1958 settlement, the appeals court held that Lilly did not expressly waive her right to physical restitution of the painting. Instead, she settled the claims between the parties.

Bea found that there remains an open question of whether the Spanish foundation new the painting was stolen when it acquired it from the Baron.  The court sent the case back to the trial court to determine that issue.