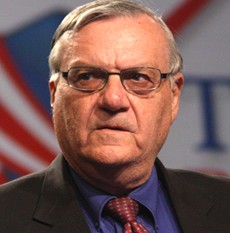 Former Arizona sheriff Joe Arpaio was convicted of criminal contempt for ignoring a 2011 order that he stop arresting Latinos simply on suspicion they may be in the U.S. illegally, according to a federal judge’s order Monday.

The conviction carries a potential six months in jail for the 85-year-old Arpaio.

Arpai, for 24 years the sheriff of Maricopa County, gained national attention for his crackdown on illegal immigration. He was ordered in 2011 by U.S. District Judge G. Murray Snow to stop targeting Latino drivers. But for 18 months Arpaio and his deputies ignored the order. Snow then ruled in 2013 that Arpaio’s office engaged in racial profiling.

He was found guilty of civil contempt. Arpaio maintained he did not intentionally violate the order and thus was innocent of criminal contempt.

“The evidence at trial proves beyond a reasonable doubt and the court finds that Judge Snow issued a clear and definite order enjoiing defendant from detaining persons for further investigation without reasonable suspicion that a crime has been or is being committed,” Bolton wrote.

She went on to say Arpaio “willfully violated the order” by failing to make his deputies comply with the order.

He will be sentenced October 5 in Phoenix.