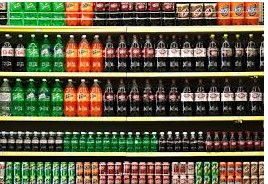 September 26, 2018 pammaclean Civil, US Court of Appeals Leave a comment

Lawyers for both the city of San Francisco and soda-makers came under intense questioning by an 11-judge appeals court Wednesday over a challenge to San Francisco’s law requiring warning labels on soda about the danger of obesity and diabetes they pose.

The American Beverage Association (ABA) and other industry groups challenged the city ordinance arguing it violates their first amendment rights by requiring the makers of sugar-sweetened beverages to put warnings on advertising in the city.

They appealed from denial of an injunction to block the law from taking effect. A three-judge panel ordered in 2017 that an injunction should be issued but the full court voted to reconsider in an 11-judge review in Pasadena.

The warning required by the city would state: “WARNING: Drinking beverages with added sugar(s) contributes to obesity, diabetes, and tooth decay. This is a message from the city and county of San Francisco.”

Richard Bress, attorney for the ABA said the city is attempting to force soda companies to convey its message in violation of the first amendment. He called the warning “literally inaccurate for type One Diabetes. He also argued that the warning on some sugary products but not others misleads

“Is this a first amendment problem or an equal protection problem?” asked Judge Andrew Hurwitz of the 9th U.S. Circuit Court of Appeals.

Bress responded that warning labels on alcohol goes to all categories, including wine, beer and hard liquor. If San Francisco’s message doesn’t take on all products at once, “it sends a misleading message to consumers.”

Judge Susan Graber asked, “So you’d be happy if the label also went on fruit juice and sugary cereal?”

Judge Marsha Berzon added, “We’re asking how far the label has to go to be accurate.”

When Bress tried to suggest that it should apply to all caloric foods, Judge William Fletcher jumped in, “Are you saying the calories from a sugary soda are the same as calories from broccoli?”

The judges also questioned what the impact would be on other warning labels, such as those on cigarettes if they sided with the soda industry.

Jeremy Goldman, attorney for San Francisco, came in for a similar round of questioning, particularly over the accuracy of the city’s warning.

Chief Judge Sidney Thomas noted that the warning is not accurate as far as type One Diabetes, which is genetic and not based on sugar consumption.

“If your information is inaccurate, it fails the test,” he said.

Judge Susan Graber asked if would object to revising the warning to specify Type Two Diabetes.

Hurwitz also raised questions about what constituted an “undue burden” on the industry to comply with the warning requirement of the warning to cover 20 percent of the entire ad and to be set off with a black box.

Judge John Owens asked if the city standard was for 50 percent of the ad space, would that be too much?

Gold argued that the city set the size based on expert research and thus it had to be considered reasonable at that amount.

The panel took the appeal under submission and will issue a written ruling in the coming months.