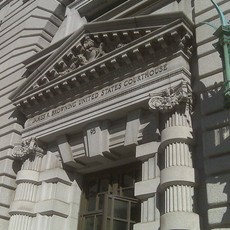 June 25, 2019 pammaclean Civil, US Court of Appeals Leave a comment

A federal appeals court split sharply over whether a Catholic school could fire a fifth-grade teacher after she told them she had breast cancer and needed to miss work for chemotherapy.

The 9th US Circuit Court of Appeals, in December, found the school’s action was not protected by a “ministerial exception” that would allow them wide latitude in hiring and firing employees. There was a call for a full court vote to reconsider the ruling, known as an en banc review.

On Tuesday a majority of the full court (26 judges) voted to reject rehearing, but nine judges dissented in a published opinion. This nine-judge dissent, all from conservative judges, argues the majority has split with other circuits, virtually inviting the Supreme Court to take up the issue.

Kristen Biel sued St. James School in southern California over her termination based on her medical needs due to cancer. The trial judge held that her Americans with Disabilities Act (ADA) claim was barred by the First Amendment ministerial exception.

The 9th Circuit reversed in December in a 2-1 vote noting that Biel’s religious function was modest. She taught a religion class two hours a week, participated in daily school prayers and attended mass with her class monthly. She had no religious training and none were required for her job.

The majority found her religious duties were to minor to be considered “important religious functions.
In Tuesday’s denial of en banc rehearing, the majority of judges on the full court agreed and let the opinion stand.

In dissent, Judge Ryan Nelson wrote, “In turning a blind eye to St. James’s religious liberties protected by both Religion Clauses, we exhibit the very hostility toward religion our founders prohibited and the Supreme Court has repeatedly instructed us to avoid.”

By refusing to rehear the case en banc, “our court embraces the narrowest construction of the First Amendment’s ‘ministerial exception’ and splits from he consensus of our sister circuits that the employee’s ministerial function should be the key focus,” Nelson wrote.