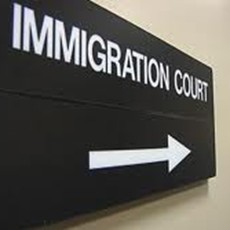 December 2, 2019 pammaclean Civil, US Court of Appeals Leave a comment

A federal appeals panel showed little sympathy Monday for the Trump administration’s rule that bars asylum to anyone who enters the US through Mexico if they first passed through a third country without seeking asylum there.

While the 9th US Circuit Court of Appeals panel appeared to agree with safety issues raised by lawyers for asylum-seekers, the court seemed less enthusiastic about reinstating a nationwide injunction against the rule. The US Supreme Court lifted the national injunction in September.

Lee Gelernt, attorney for the ACLU representing four groups that help asylum-seekers, argued that the government’s expansive argument would give the attorney general the authority to abrogate treaty obligations and essentially end the asylum process.

“They are saying the AG can do whatever he wants if it is more restrictive, he just can’t expand asylum rights,” Gelernt said. “That is untenable. It could eliminate asylum.” The rule would allow denial of asylum applicants even if the third country an alien passes thought is unsafe, even if the country doesn’t recognize LGBT rights, he said.

Stewart argued that the purpose of the rule was to deter meritless asylum claims and deal with urgent ones. Asylum is granted at the discretion of the US and is not a right, he said

Fletcher responded that the appeal is dealing with eligibility to apply for asylum and not the AG’s discretion, down the road, to grant or deny it. He pointed out Congress passed a statute that imposes certain conditions on the government to meet US treaty requirements for granting asylum.

Judge Eric Miller, a Trump appointee to the court, asked if the attorney general can issue a rule that would limit time to apply for asylum to those in the US less than a week, for example? The current law requires applications within one year of entry.

“Can the attorney general impose a condition that would make the statute pointless?” Miller asked.

Stewart attempted to press the point that if an alien skips seeking asylum in the first country they land, it suggests they don’t have a valid claim or an urgent one.

Fletcher jumped in. “I have trouble following you.” The safety requirement is similar to the “safe resettlement” terms of the law, that asylum can be denied if someone has safely settled in a third country. But that has detailed requirements; such as a functioning asylum system, negotiated bilateral agreements and safety.

Under the current rule, “in fact, people are barred when it is quite unsafe,” Fletcher said.

Judge Richard Clifton focused on what evidence the government had that it was safe to deny asylum to people who pass through another country. “I understand your theory. But Does Mexico have a process? Will they be safe? The Safe Third Country provisions [passed by Congress] have rules.”

Four groups representing asylum-seekers sued following a November 2018 proclamation that it will not consider asylum applications if the alien traveled through a third country to get to the US. The rule was blocked by the trial court. The Justice Department appealed.

That government ban applied regardless of whether the alien could legally seek asylum in the US and the degree of danger they faced if returned to their home country.

The asylum ban ended a 40-year, unbroken status quo created by Congress in the 1980s governing asylum law. It barred asylum petitions for everyone crossing the southern border, except Mexicans who did not need to pass through another country to cross the border.

A written ruling will be issued in coming weeks.