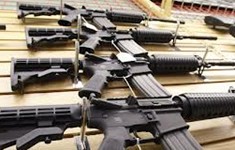 June 29, 2020 pammaclean Civil, US Court of Appeals Leave a comment

A federal appeals court has upheld Maryland’s ban on “bump stocks” and other similar devices that allow guns to fire like an automatic weapon.

The divided three-judge panel of the Richmond, Virginia-based 4th US Circuit Court of Appeals rejected the appeal of gun rights advocates Monday saying they did not have a legitimate fifth amendment claim.

Maryland’s ban on bump stocks took effect in October 2018, in the aftermath of a gunman who opened fire on a crowd at a Las Vegas concert from a high-rise hotel. The attack by Stephen Paddock left 58 people dead and dozens wounded.

A national ban on the sale and possession of bump stocks took effect in 2019. The US Supreme Court refused to halt the federal ban last year.

The Maryland group called Maryland Shall Issue filed a class action against the state and Gov. Larrry Hogan, a Republican, who signed the ban into law.

The group had challenged the law on fifth amendment grounds arguing the ban amounted to an unconstitutional “taking” of private property without just compensation.

“We can think of few types of personal property that are more heavily regulated than the types of devices that are prohibited by [the ban],” wrote Judge Stephanie Thacker. Thus, the group does not state a claim that the law violates the takings clause of the fifth amendment, she said. She was joined by Judge Henry Floyd.