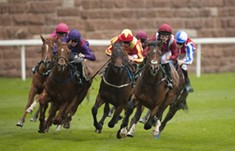 March 21, 2014 pammaclean Civil, US Court of Appeals Leave a comment

Tattersalls got the run around from a filly named Singapore Lilly.

The English auctioneer of thoroughbred horses sold Singapore Lilly to Jeffrey DeHaven for $357,000 in 2010.  DeHaven prompted shipped the horse to the U.S., entered her in races but neglected to pay Tattersalls.

Tattersalls sued and won back Singapore Lilly a year later, but by then the horse’s value had declined. This led to a debate about exactly how much DeHaven should pay for the lost value of the race horse.

This led to litigation over whether the loss should be determined by an expert appraiser or by Tattersalls again auctioning the horse.  Although the trial judge found Lilly had not depreciated in value but instructed Tattersalls to ask to amendment judgment after it could supply evidence of the horse’s lost value.  But the Jockey Club refused to auction the house because the ownership dispute was still in court.

Eventually the ownership was resolved.  But the trial judge had to correct his earlier ownership-only order to allow for depreciation.  He accepted expert testimony that Singapore Lilly was worth just $75,000 in 2012 and DeHaven owed $282,000 in damages as well as the horse to Tattersalls.

DeHaven appealed to challenge the correction to allow for damages.  On Friday, the appeals court said Tattersalls should be able to get the damages but the judge didn’t quite handle the whole process as simply as he could have.

U.S. District Judge James Otero in Los Angeles should have been able to certify ownership of the horsse to Tattersalls to allow the Jockey Club to go ahead with the auction.

But to be fair, Tattersalls did not request such a partial judgment, the panel said.

This was a dispute about court rules, but in the end, Tattersalls wins across the board. Singapore Lilly got a home and DeHaven will have to pay up.