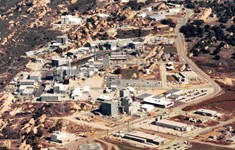 September 22, 2014 pammaclean Civil, US Court of Appeals Leave a comment

Disposal of radioactive material at a World War II-era nuclear research and rocket testing facility was once so bad that military workers fired  shotguns at drums to make them explode and burn.  Nonetheless, an appeals court says cleanup can be at the federal standard, rather than a higher California standard that would leave the land suitable for subsistence farming.

The 9th U.S. Circuit Court of Appeals struck down a 2007 California law Friday that would have required the Santa Susana Field Laboratory, 30 miles from Los Angeles to be cleaned of radiation that people could grown vegetables.

The Department of Energy, which was responsible for cleanup, hired Boeing Co. to remove radioactive contamination.  Boeing rejected the state law aimed at the Santa Susana site cleanup.  Instead, Boeing said it would follow less stringent federal standards that allow for industrial, recreational or residential use.

Boeing sued California in 2010 to block enforcement of the state law and challenged its validity.  A Los Angeles federal judge ruled in 2012 that the state law improperly regulated the federal government in violation of the Constitution’s supremacy clause.

The 2,850-acre Santa Susana site had soil, ground water and bedrock contamination from radiation and toxic chemicals.  But the law applied only to radiation cleanup. In 1959 a partial meltdown of a reactor at the site spewed radioactive gases into the air for three weeks.  That partial meltdown accounts for 90 percent of the contamination, according to the court.

The remainder came from other nuclear reactor accidents and an open burn pit for sodium-coated materials and numerous fires at a “hot lab” used to cut up nuclear fuel from the site’s reactors and other fuel rods shipped there from around the U.S.  In addition, one disposal procedure consisted of shooting barrels of toxic substances with shotguns to make them explode and burn, Kleinfeld wrote.

Operations at the site stopped in the 1980s and now it is limited to efforts to clean it up.