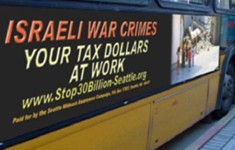 March 18, 2015 pammaclean Civil, US Court of Appeals Leave a comment

The Seattle bus system’s rejection of an ad that expressed opposition to the U.S. government’s financial aid to Israel did not violate the free speech rights of the Seattle Mideast Awareness Campaign, a divided federal appeals court ruled Wednesday.

The Metro bus system’s rules created a limited  public forum when it allowed external bus ads with a variety of restrictions and thus refusal of the non-profit group’s ad did not violate the First Amendment, the 9th U.S. Circuit Court of Appeals said in a 2-1 decision.

In her sharp dissent, Judge Morgan Christen said the county’s policy and practice “unmistakably demonstrated an intent to create a designated public forum on its Metro bus exteriors.”

“It is clear that even if Metro initially intended to limit access to its bus exteriors, it abandoned that intent by allowing ads on controversial subjects ‘as a matter of course,’” she said.

The majority opinion, by Judge Paul Watford said the advertising program prohibited ads with a wide variety of topics, including for alcohol and tobacco, adult products and services, any illegal activity, minors who appear to be engaging in sexual activities or ads with flashing lights that may be distracting. In addition, the program had two “civility clauses” that prohibit material that could result in disruption of the transit system or incite a response that threatens public safety.

In 2010, the SeaMAC, a non-profit group that opposed U.S. support of Israel proposed a sign that stated:  “Israeli War Crimes You Tax Dollars at Work” and included a website address.  It was initially approved by the county, which acknowledged it was controversial but did not violate the ad policy.

One month later, a local TV station broadcast a news story about the ads’ approval, prompting an unprecedented, hostile response of nearly 6,000 emails over 10 days.

Some stated they would vandalize the buses or disrupt service.

A few days after the story appeared, photographs depicting dead or injured bus passengers and damaged buses, in a portrayal of the aftermath of a terror attack, appeared under the door of the Metro customer service center.  It said, “No to bus ads for Muslim terrorists.”

Not everyone expressed anger.  Some wrote to say they were concerned for their safety.

Then two pro-Israel groups, HorowitzFreedomCenter and the American Freedom Defense Initiative, entered the fray by submitting their own counter ads denouncing what they called, “Palestinian War Crimes.”

Even the King County Sheriff contacted the transit executive to say running the ads might leave passengers vulnerable to injury from thrown rocks or bricks and increase the chance of the buses as a terror target.

The CountyExecutive ultimately withdrew his approval and rejected the two pro-Israel ads by HFC and AFDI.  The ad rules were also revised to exclude all political or ideological ads in the future.

SeaMAC, the non-profit sued saying it had a First Amendment right to use government property – the sides of the metro buses – to promote its message.

The court determined the Metro system had not turned the sides of buses into a public forum because it had limited use of the space. As such, the rules for limited public forums apply, Watford wrote.

“The defining characteristic of a designated public forum is that it’s open to the same ‘indiscriminate use’ and ‘almost unfettered access’ that exist in a traditional public forum,” he said.  He was joined by Judge Alex Kozinski.

“The undisputed evidence establishes that the county has consistently rejected proposed ads that fail to comply with the bus advertising program’s subject-matter limitations,” Watford said.

As a limited public forum, the county’s application of its civility limits “was reasonable and viewpoint neutral,” he wrote.

In dissent, Christen said the bus ad program created a public forum.  “The First Amendment requires that the county’s decision to restrict SeaMAC’s speech must be necessary to serve a compelling state interest and narrowly drawn; in other words, it must survive strict scrutiny.”  She said she would send the case back to the trial court to determine if that standard was met.

It may be the county “inappropriately bowed to a ‘heckler’s veto’ and suppressed speech that should have been protected,” she wrote.