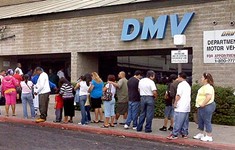 Federal prosecutors charged six people Tuesday with conspiracy, bribery and fraud in the 17-count criminal indictment.  It accused three California DMV workers of taking the payoffs of up to $5,000 each for 100 commercial licenses and owners of three trucking schools were accused of making the offers, the government disclosed.

The licenses have been invalidated along with hundreds more allegedly obtained through suspicious circumstances, according to the government.  The truckers who held the licenses were involved in 23 accidents while driving, but none were fatal, according to prosecutors.

The government alleged the bribery lasted from June 2011 until March 2015.

This is not the first of the DMV’s legal problems.  In June, a California Highway Patrol officer was charged with accepting bribes at an El Cajon DMV office.  In March, a DMV employee at the Westminster office was accused of accepting a payoff to provide driver’s licenses.

And in February, a San Diego DMV official pleaded guilty to accepting bribes for undoing license suspensions and issuing temporary licenses to drivers who had been arrested on drunken driving charges.