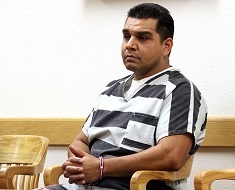 A former West Sacramento police officer won partial reversal on six of 18 counts for his convictions Friday of the kidnap, rape and oral copulation of five women he forced into the sexual acts or face threat of arrest.

Sergio Alvarez, 40, was sentenced to 205 years to life in prison in 2015 following a trial in which victims testified that he picked them up while they walked alone in the dark along a strip known for prostitution, drugs and homelessness in Sacramento.

Investigators found a “spycam” Alvarez had used to record some of the sex acts and he surrendered his badge after his arrest.

On Friday, the 3rd District Court of Appeals agreed with Alvarez that there was insufficient evidence to support some of his convictions related to aggravated kidnap and reversed. But the court largely rejected his claim the trial judge gave erroneous instructions to jurors.

The appeals court found insufficient evidence of oral copulation and reversed five counts of oral copulation, two of which included the kidnap allegations, and dismissed a single sentencing enhancement charge for multiple victims.

It ordered a retrial on a single count oral copulation by means of duress.

The panel rejected his challenge to five aggravated kidnapping counts. The court said that an officer transporting someone legally arrested is not kidnapping the arrested person, but “once the transportation is no longer for lawful law enforcement objectives, it may transmute into a kidnapping.”

The panel rejected Alvarez’ claims that several of the women volunteered to go with him. Although in one case, of Karen N., the court held that she did resist being transported in his car, even though he did not take her home as promised thus she was not transported by threat.  It reversed his conviction on that count.

The court upheld conviction on five counts of rape or oral copulation under threat of authority. It reversed one of three counts of duress for insufficient evidence.

Ultimately, the court agreed with Alvarez that his sentence for rape and oral copulation by threat must be stayed because they are part of the aggravating kidnapping offenses. Thus the court stayed sentencing on two counts.

The court did not indicate what his ultimate resentence may be, but instead sent the case back to the trial court.